After leaving the peace and tranquility in Cafayate, it was time to get down to business in Buenos Aires (BsAs).

In reality, the point of this trip was to find a place for us to live between October and February. With only two-and-a-half days for an on-the-ground search, there was little sightseeing to be done — which translates to very few photos for this post. Perhaps it’s cheating, but I’ll slip in a few snaps from previous trips, because what’s a blog post about a faraway city without pictures?

When we decided on BsAs as our first winter getaway, the Canadian dollar was much stronger against its U.S. counterpart. Seems strange that the U.S. dollar would have any bearing on the cost of accommodation in Argentina, but it does. The Argentine economy is, and has been, in such a state of flux and wacky inflation that the rental market insists on U.S. dollars for payment. That means cash, upfront. There’s nothing like traveling with your pockets stuffed with cash.

I’ll get more into how they go about exchanging dollars to pesos in another post — it’s more than a little complex and nothing like I’ve seen anywhere else in the world.

Over the past year or so, I’ve searched many websites for extended-stay rentals. I found a building in Palermo (a neighbourhood close to the city centre) that rents studio flats. The thought of staying in a studio for four months didn’t leave me warm and fuzzy, but I was willing to check them out. Tanya, my trusty traveling companion for this trip, stayed in one and I booked another. The upside was that the monthly rate was slightly under budget and anyone visiting could rent by the day or week in the same building. The downside:  the thought of being crammed into 537 square feet. It worked for just me on this short trip but became clear the minute I walked into the unit that Frank and I would be tripping over ourselves in no time. Note to designers – when a bathroom is already small, don’t add a bidet. Seriously, if things get that messy, jump in the shower.

Our next stop was the flat of a friend of a friend. It’s a two-bedroom in an area of Palermo called Las Cañitas a little further out but on the subway line and most things are a short/cheap taxi ride away. 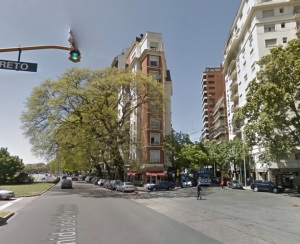 New home October 2015. Apartment is on the point of this triangular building, third floor, with rooms on either side.

The place hit every checkmark and then some: flexible term (no one is living there until we arrive), under budget, no deposit, an extra room for guests, very close running pathways, a restaurant on the main floor that delivers in the building, maid service twice a week. The fact it only has one bathroom was a very minor detail that we’re more than happy to live with. Such first world problems. We’re now more excited then ever to start our adventure in Argentina.

Excuse me while I fast track my Spanish studies. Pronto!

2 thoughts on “Success in BsAs”