Despite what you might think, the flight from Calgary, thorugh Houston, to Argentina isn’t that bad. I think it was something like 17-and-a-half hours of total travel time. After my friend Tanya and I arrived in Argentina we had an overnight stay in Salta. Refreshed the next morning, we set out in a rental truck (Tanya will be the first to tell you that she doesn’t pack lightly). But when you consider she has a home down here, it stands to reason that she needs to bring some things that are difficult, if not impossible, to get in Argentina. From what I can summize, Argentina has some pretty tight import rules. It seems that if it’s not made in Argentina, you can expect to pay double what you’d pay in North America.

The drive from Salta to Cafayate is about three hours — give or take. Nestled in the Andes within the Calchaqui Valley, Cafayate is bordered on the east and west by rugged, red-hued peaks.

Windy, narrow roads twist and turn through the valley with sheer drops on one side and on the other; an intermittent, unpredicitable, progression of oncoming cars; 18-wheelers; and two-tiered, tour buses. The views are spectacular. Just when we think we can anticipate the blind curves, a herd of about 40 goats appear in our lane as we round the next bend.

Tanya and her husband Bevan finished building a home in this area recently. I’ve been lucky enough to visit Cafayate three times over the past five or six years. Their home is part of a large development that includes a vineyard, golf course, polo fields and hotel.

The grapes were harvested weeks ago. Ever so slowly, the leaves on the vines are turning from deep green to rusty orange and brown. Autumn here comes gradually, much like the pace of life in this region.

Wine production abounds in this area. Signs for the various vineyards and bodegas dot the roadsides. Needless to say, drinking wine has played a central part in our daily activities. Wine tastings lead to wine buying, which leads to wine drinking on the back patio in the warm afternoon sun or at night as we stoke the fire in the empanada oven. 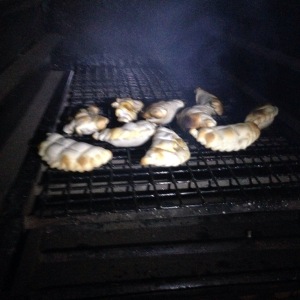 Mastering the art of baking empanadas

Cloudless skies greet us each morning and last the full day. The evening sky has been equally as clear. There is virtually no light pollution here, which allows us to see a vast array of stars and constellations.

I’ve taken many photos, and as nice as they look here, they can’t fully capture the extreme beauty in every direction.

As predictable as the cloudless sky, so to are the numerous water birds and birds of prey. Small foxes dart around the property. 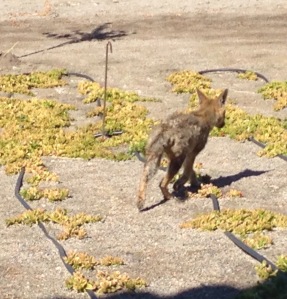 Many small foxes dart around the property.

The town square is typical of what you’d find in small, Spanish style villages — a town square with a church, police station, stores and restaurants. We had to adapt to shopping for food before or after siesta. Shops are closed from about 11 a.m. to later in the afternoon. 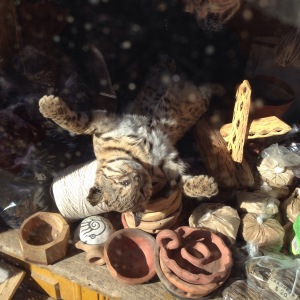 One of the more interesting stores was La Ultima Pulperia. A catch-all for dried goods, including a wild cat – we think this was an Andean mountain cat.

After about ten days in Cafayate, it’s time to head to Buenos Aires and find an apartment for Frank and I to rent when he and I return in October. 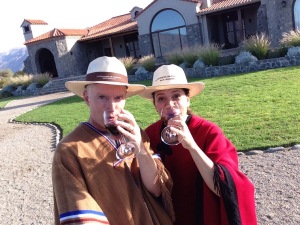 One thought on “Paradise in the Andes”