For reasons unknown, whenever my son’s grandmother, Shirley, plans to kick back, put her feet up, read, or generally have “me” time, she refers to it as “having a Hong Kong day.”

This is all the more peculiar from a Prairie woman whose adventure to Hawaii in her 50s marked her only departure from North America. All of us who know and love Miss Shirley have puzzled for many years about her mysterious, occasional Hong Kong days.

Our recent trip to Hong Kong was more than one day. We figured that four days should be plenty of time to explore the former British colony, which is now a special administrative region of China (China lite).

Frank visited Hong Kong about 20 years ago — two years after it reverted back to China. During our years together he has talked fondly about how the city had a unique blend of British and Asian cultures — well-dressed people (many of whom spoke English) crowding the sidewalks and if they weren’t on the sidewalks they filled the streets in expensive cars. He found that it had an air of exotic luxury, jam-packed in a tiny place surrounded by skyscrapers.

He describes it best as: London had a baby with New York and it was born in China.

Hong Kong has an amazingly efficient public transportation system. Minutes after getting off the plane, we zipped through immigration and customs and walked only several dozen metres to the express train that shuttles passengers 25 kilometres to the city. The train only has three stops. Ours was the last one — Central station on Hong Kong Island.

Given the density of Hong Kong (~16K/km2) real estate is among the priciest in the world. That translates to pricy hotels. We found a good deal at a hotel on the island that provided us easy access to many of the places we wanted to see. Additional plusses included Nespresso coffee, unlimited bottled water and a full-body massage chair to recuperate in after our days of walking — definitely the makings of a Hong Kong day in that chair.

A group walking tour on our first full day set the stage for our extended adventures. Having an actual guide breaks with our recent tradition of using self-guided walking tour apps. Having a guide with us to answer questions helped to reorient Frank to the area and highlighted the things that have changed in the 20 years since Hong Kong returned to China.

These two are having a bonafide Hong Kong day. Guaranteed!

The guide took us to a converted army housing complex in the centre of the city that is now filled with small, independent gallery spaces and shops. While walking around, he had us sample a local coffee/milk/iced tea drink (refreshing) and a traditional egg/custard tart (good, not sweet). He took us on for a short spin on the longest, outdoor, covered escalator system in the world. It’s ~800 metres long with a vertical climb of 135 metres. In the morning it shuttles approximately 85,000 people from the mid-level residential towers down to their offices. In the afternoon it switches direction and makes the commute home a breeze.

Our guide also explained how, instead of metal scaffolding for high-rise construction, they use bamboo. It’s a jaw-dropping sight to see a bamboo grid reaching up from the sidewalk hundreds of feet into the sky held together by nothing more than plastic ties.

Much of Hong Kong is built on a hillside. The streets twist and turn, which makes navigating from place to place a bit challenging. The tall buildings created interference with the GPS map on our phone making it difficult to figure out what street, staircase or alleyway we needed to take. It seemed we were constantly having to backtrack.

There are plenty of ancient, uneven stone stairs that link one street to another. Other cut-thorough alleyways are lined with vendors selling every thing from electronic accessories to fruits and vegetables to slabs of pork on meat hooks. By far, the most popular item for sale in the district where we stayed is dried seafood. There are sacks and crates filled with every imaginable dried sea creature at countless stores side-by-each. Let’s just say the smell was a tad pungent.

An alley between streets chock-a-block full of fruit, veg and odds and sods.

Shirley, did your Hong Kong day involve buying dried fish belly and squid in the alley? I thought not.

It’s difficult to get a real sense of the how dense the city is by standing on the sidewalk in the thick of it. There are two vantage points every visitor to Hong Kong must hit to take in the beauty of the city and it’s surroundings.

The first is from the Kowloon side of Victoria Harbour looking back to Hong Kong Island — preferably at night. The tall buildings of the city are lit up along the harbour. It’s near impossible to capture, digitally, unless you take a panoramic photo, but then you’d miss the flashing lights and projected images on some of the buildings — my best attempt is below. And while you’re on the Kowloon side, you need to walk up the wide avenues lined with the luxury brand flagship stores for Chanel, Hermes, Prada and the like. We have more than a few friends who could do some serious damage there.

The other vantage point is from above. Had we more time (and had the weather been more cooperative), we could have hiked up to Victoria Peak. Instead we took the 10-minute tram to the top. The views are incredible, but again, difficult to capture in a single photo.

Because adding one new country to our list on a four-day trip isn’t enough, we booked a quick trip to Macau — a one-hour ferry ride from Hong Kong. Macau is another special administrative region of China and was a former Portuguese colony. As a gambling Mecca for Chinese, the city is a bit of an unpleasant mashup of tacky Vegas with European village influences: the Tropicana had a baby with St Paul’s Cathedral.

Glitzy casinos on one side. On the other, what once was a charming town square with black and white tiles and church ruins tucked in behind. Both offerings seem to draw in the tourists. Since we aren’t much for casinos, we covered the historic ruins and European parts of the city in about four hours.

The “Grand” Lisboa hotel and casino

The ruins of St. Paul’s 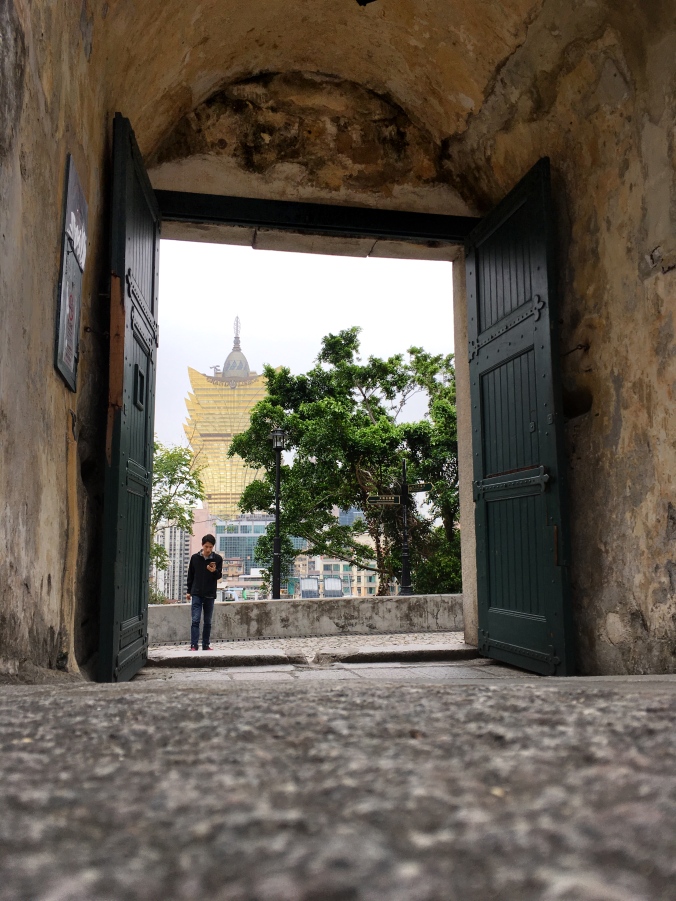 Monte fort that was used to defend St. Paul’s church from (casino?) pirates. 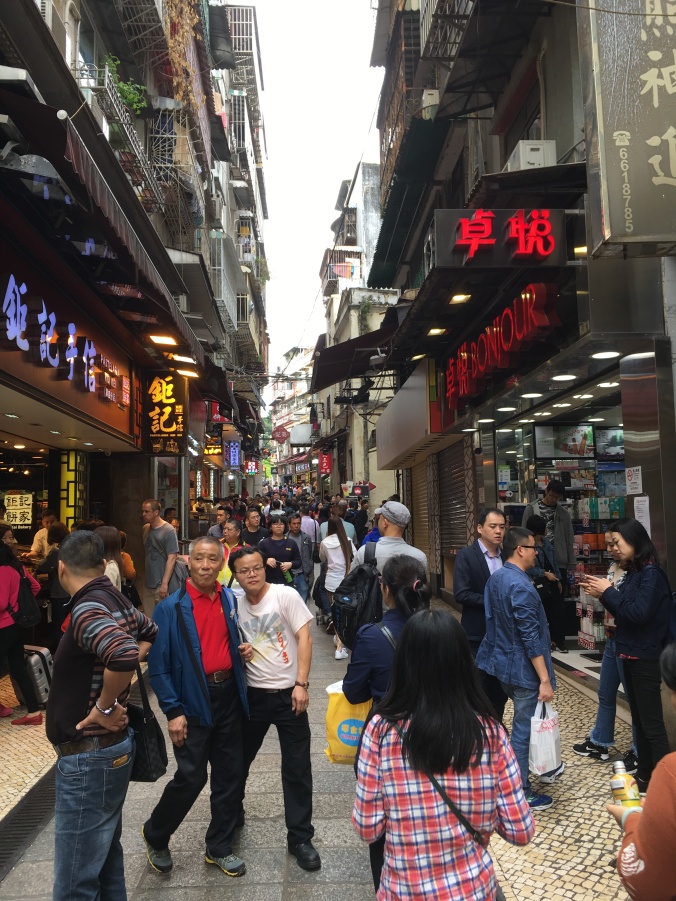 Frank says that in the 19 years since he was last in Macau (which, coincidentally, is roughly the same time it ceased to become a Portuguese colony), the scales have tipped more to casino tackiness and much less remains of the charm that was old town.

Our four days in Hong Kong went by in a flash. Before we knew it, we were back on the express train to the airport. Hong Kong is much as Frank remembers: the pervasiveness of expensive cars, the ease and efficiency of getting from place to place, and impossibly more skyscrapers than before.

Shirl, we’ve had our Hong Kong day(s) and we think you might be on to something.

Now back to more Bangkok days. Our time in Southeast Asia is winding down. Will we squeeze in another trip before we return to Canada? Stay tuned.