What would life be if we didn’t have room to improve? As it happens, I could stand to improve my storytelling by doing a better job of keeping events in sequence. In my previous post I talked at length about #streetmeat in Bangkok, but failed to actually place us in the city (or country for that matter). The post before that had us arriving in Berlin (in September!?!). Apologies for mixing things up – I’ll get better at this – stick with me.

On January 1, we zipped up our suitcases and started our 2018-winter-away-adventure. The only confirmed plans we had were one-way tickets to Bangkok with the idea to return to Canada some time in April.

For the past two years, we spent several months living in Buenos Aires and traveling around South America. Despite this year’s change in itinerary, we are still very enamoured with South America. While in Buenos Aires, our social circle was strong and we are missing those friends. But we felt that we should forge a different path this year and try on a new culture. We’re confident that we’ll be back to South America again – perhaps within the next 12 months.

Getting to Thailand was pretty straight forward. We flew on EVA from Vancouver to Bangkok (through Taipei). Our premium economy seats tilted back a few extra inches, which really helped us to be able to sleep much of the 11-hour portion to Taipei – and ultimately, helped us recover from jet lag sooner than we anticipated.

That said, the 10-hour time difference did have us waking up early and, subsequently, fading slowly into our soup around eight in the evening. The first week was tough but we forged ahead exploring our new neighbourhood each day.

We’re renting a one-bedroom apartment in a high-rise building in a densely populated part of Bangkok. It’s about a 10-minute walk to the closest skytrain station.

Frank’s brother, who has lived in the city with his family for more than a decade, helped us find the apartment and has been a huge help getting us set up and grounded. We are only about two kilometres from their house so we get to see our three, school-aged nieces often.

In addition to having family nearby, the weather and affordability scored high on the list of reasons to spend winter months in Southeast Asia. It’s not our first time to this part of the world. We tested out a few countries in 2013. I detailed that trip in another blog called, “Only Carry-on,” where I wrote each entry as a travel letter to a famous person, living or dead.

Since arriving in Bangkok, the temperature is about 22C at sunrise. By the end of the day it’s anywhere from 27C to 32C. Each day starts strangely hazy and by 10 in the morning the haze burns off and gives way to full sun. In the three weeks that we’ve been here, it has only rained one morning.

But all that heat aside, air conditioning is never hard to find; in our apartment, the 7-11s on every corner, and if you’re on the local skytrain they keep it at, what seems like, 10C. More times than not, getting off the train into the muggy heat of the city has been a welcome relief from the blasting cold AC.

Let me be clear, I’m not complaining about the heat. I promised myself (while standing outside in Calgary when it was -25C) that I would never complain about traveling somewhere that is “too” hot. I’d much rather be hot than cold, particularly if AC is readily available.

I interrupt this post with a few, random photos. 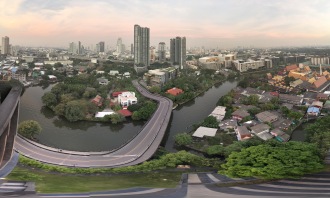 View from our apartment 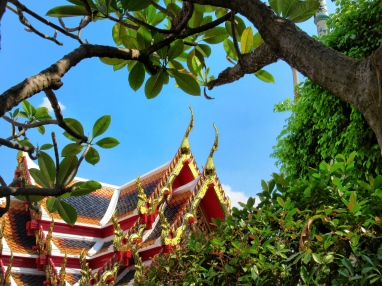 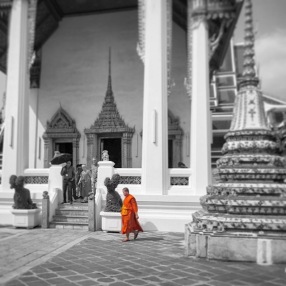 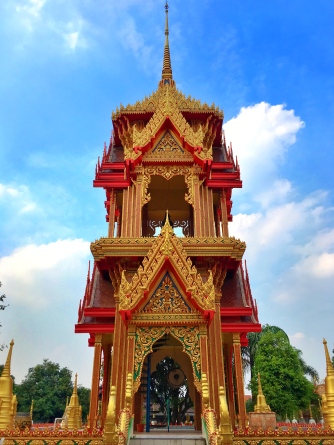 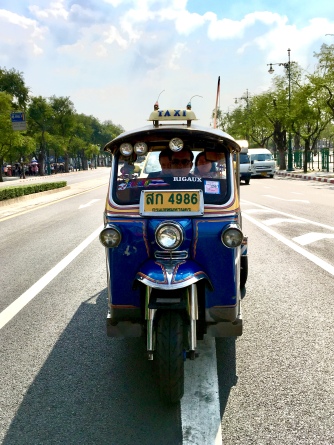 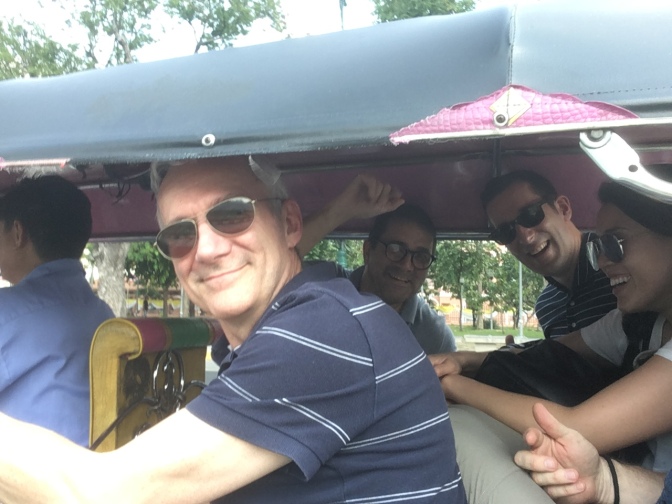 Five people in a tuk tuk

Besides the weather and the prevalence of air conditioning (and street meat at every turn), what follows are a few observations that are different than what we see in North America (and South America for that matter):

Lane reversal: Once you’re out of the airport, the first thing you notice is that vehicles drive as they do in the U.K., Japan, India and a handful of other counties. Since we aren’t driving here, that’s not too much of an issue. It does become an important point to remember when crossing streets (looking right before crossing just doesn’t come naturally to me). And they stick to the same pattern when walking on sidewalks (if someone is walking toward you, you keep to the left). Even escalators follow the pattern (up is on the left).

Essence of chicken: It’s a liquid that comes in small glass jars and is something they drink to ward-off illness (or when they’re sick to speed up recovery – I’m not sure). I haven’t researched it, but it’s best been described as a potent chicken broth. There are several varieties and it is sold in every grocery store (and 7-11) – I haven’t tried it, and probably won’t.

Surgical masks: I know that it’s common practice for people in parts of Asia to wear these masks in public, but I haven’t figured out yet when they choose to wear them. They seem to wear them to prevent spreading germs and to prevent catching germs. True story: a woman on the skytrain sneezed a few times in a row and another woman found a mask in her own bag and walked over and handed it to the sneezer – then she walked away. Sneezer donned the mask; world order restored. I’ve seen some people wearing glammed up masks with patterns and rhinestones (fashion statement?), but on others, some look ratty like they’ve been worn too long.

Sniffy stuff: It’s not uncommon to see locals discreetly putting something the size of a chapstick up to their nose to sniff it. Too clarify, these people are not mask wearers – they are a whole different group. I’ve heard of people in North America becoming addicted to sniffing Dristan, so I can only assume that this is along the lines of that. From what I’ve observed (and the skytrain is the perfect place for lots of observing) these sniffers take quick, little sniffs every minute or so.

No horns: Okay, there is some horn-honking, but by-and-large, people here don’t honk car or scooter horns. This is strange considering the number of cars and motorbikes on the road and the near-misses every second or so. It’s equally strange how little they rely on the horn considering how much horn-honking goes on within the large cities in Vietnam. Perhaps the Vietnamese make up for the rest of SE Asia.

Adoration of the royal family: The current King is the son of the King who died a little over a year ago. Throughout the city, there are large murals of the previous (deceased) King. These have been up for years, some of him as a young man, some of him older. They are on boulevards. They are on sides of buildings. Framed versions are on display in shop windows and on walls in restaurants. Sometimes there are multiple pictures. I did learn from my eldest niece that pointing at the photos isn’t acceptable, which makes asking who’s who a more interesting conversation.

We are taking a quick vacation, from this vacation, to visit Australia and New Zealand early in February. Two new countries for both of us.

But before I post from down under, I’ll get out another post by the weekend to answer a question that we get a lot: “What do you do all day?” As a teaser, one morning last week I was at the dentist. I’ll describe how it compares to my dental adventures in Buenos Aires that I shared in a post last year.

Stay tuned and thanks for following along. Your questions and comments help me create new content.