Hooray! There are tiny buds on the trees. Although it’s technically spring, it hasn’t quite fully sprung yet in Calgary. We had high hopes that the “non-event” winter everyone told us about would translate to mid-March temperatures consistently above freezing. It appears we arrived back in Canada about two weeks too early for that.

It wasn’t exactly sub-Arctic when we landed, but there was a dusting of snow that met our flight and what seemed like a bone-chilling wind when we crossed the cabin door threshold.

We promptly hopped in a taxi and 30 minutes later cocooned ourselves in exquisite flannel sheets from which we are now just emerging. Although it feels good to be back on familiar ground, the residue of life abroad still coats our consciousness, which is making reintegration a bit clunky.

When you’ve lived in a place for years and can speak the language, you take for granted the ease of completing day-to-day activities. Living in a new country where you struggle with the language  (understanding and being understood) slows   –   everything  –   down. That’s not a complaint – quite the opposite. Coming from a culture where everyone is forced to keep up, being forced to slow down was a breath of fresh air. Where the pat answer in North America to “how are you doing?” is nine times out of 10 a variation of “run off my feet.”

Each of our days away were filled with small challenges that I’ve described in previous posts: getting from point A to point B; finding where to buy everyday items and services; making basic transactions. As hard and awkward as it felt at times, we’d beam with pride in pushing ourselves to make it work.

Ultimately, we adapted to slowing down our lives. Taking each day as it came. Those are new characteristics we hope to integrate into our lives wherever we are.

But it’s more difficult in Calgary. We have a faster paced history here. It’s much easier to get swept up into past habits of being in a rush to get somewhere. Two weeks in and we are still resisting the urge to pack our days full of activities – to be “busy.”

When we feel that urge, we remind each other of the brilliant experiences we had living away from ‘home’ for five months. Like these ones….

Our final week in Buenos Aires was a new adventure of sorts. We test drove a different apartment in a neighbourhood called Palermo Hollywood.

It was a one-bedroom flat in a small building. The main selling feature was the very large, private, rooftop terrace. Having easy access to such an amazing outdoor space made up for an indoor space much smaller than we had during our first four months in the city. 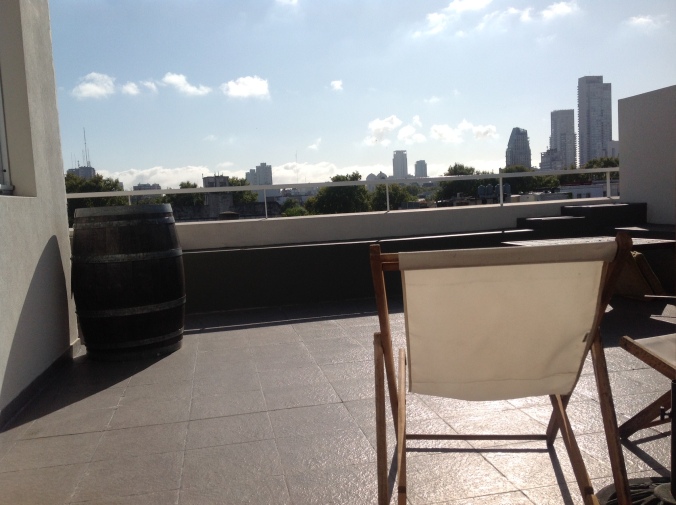 For six glorious days I would wake at sunrise, make coffee, sit on the terrace and survey the neighbourhood. At only five storeys, our building was one of the tallest in the immediate neighbourhood.

One drawback was that we weren’t there quite long enough to get used to the noise from the sidewalks below. Palermo is such a walking friendly neighbourhood, so when late-night revellers leave the bars to walk home, it’s far to easy to hear them talking (shouting) to each other: Fridays and Saturdays seem to be the noisiest – our blessed earplugs helped to some extent.

Despite our relaxed pace, it seemed our last week in Buenos Aires went by in a split second. We were able to have a few farewell meals with friends and, the highlight, a truly magnificent sailing trip organized by our friend Sharilyn.

The weather was perfect for our afternoon sail. We started up the coast in San Isidro, a bedroom community north of the capital, and sailed to Puerto Madero and back — a little more than 40 kilometres. The views of the city along the water gave us a completely different perspective of our home for five months. There are no gaps between the neighbouring cities, so tall buildings stretch along the coast for as far as you can see. A very impressive sight. 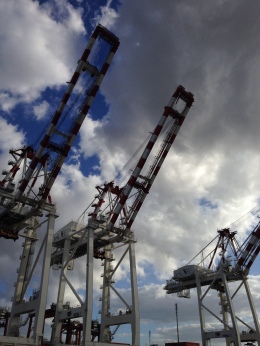 The waters were calm and there was enough of a gentle breeze to carry us down and back on our six-hour outing. Our timing couldn’t have been better to witness a spectacular sunset before we made it into the slip.

With our legs barely adjusted to land, we shifted gears into packing mode. Remarkably, we didn’t need any extra luggage.

The next thing we knew, we were standing on the corner, dufflebags at our feet, flagging down a taxi to take us to the airport.

We were barely out of Palermo when our backseat conversation focussed on our next adventure – so many options.

But first we will enjoy a gentle pace back in Canada while we catch up with family and friends.

We’re not looking too far out at the moment — still trying to take things one day at a time.