“Sorry about the weather,” is something we’ve heard several times from locals since we arrived two weeks ago. It seems that this is one of the “coldest” and “wettest” springs that anyone can remember. Everyone here says it should be much warmer by this point in the season. For the record, we’re okay with what they call spring here. It’s been brilliant: a bit breezy but very nice nonetheless. Over the past 14 days, it rained hard one night, and this past Thursday it was overcast during the morning and tried hard to rain but it didn’t amount to much. Beyond that it’s been sunny and warmish.

The temperature doesn’t have wild swings through the day like in Calgary. If the day starts at 10 degrees celsius it might get up to 15. Most days it has been between 15 and 17C when we’ve woken up and it goes up to the low 20s. Given the horrific reaction people here are having to those temperatures, we can surmise it’s going to get a lot hotter. Clearly, many here aren’t accustomed to cool temps. We have stared, mouths agog, as people scurry along the sidewalks bundled in what we consider severe winter wear: puffy down jackets, scarves and gloves. Even the dogs wear jackets. Meanwhile, I go running in shorts and a T-shirt. Other runners wear the same, but it’s not uncommon to see people out for a run when it’s 20C in fleece pants and with jackets zipped up to their necks. Go figure!

One of several outdoor fitness groups.

I’m not sure if physical fitness is the norm, but I see lots of people outside enjoying the multitude of parks and pathways that wind their way towards the city centre. Running and cycling paths surround the parks and they are all well used. This is a nice juxtaposition to the large number of people here who smoke. Maybe the smokers are also runners. I’ve known a few.

A very common sight in the city, be it on a sidewalk or in a park, are people walking their dogs. And if they aren’t walking their dogs, someone else is. And if someone is getting paid to walk one dog, you can be sure they are going to walk as many as possible. Here’s the drill: 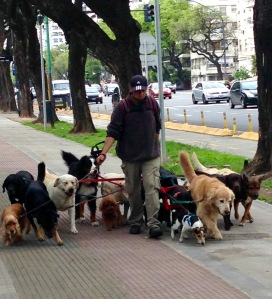 Then they walk as a snuggled, 56-legged mass to the park where they spend an hour or two. Then guy reverses his route and untangles the dogs, working the drop-off in a similar fashion to the pick-up.

Not only must you watch out for these furry, leashed critters along the sidewalks, you MUST also watch for what they leave in their wake. It appears the poop-n-scoop phenomena is slow to catch on here. Thankfully, building maintenance and store owners are pretty good at hosing down sidewalks in the morning so each day starts fresh.

And speaking of fresh, I didn’t want to leave anyone hanging on the outcome of our adventures in laundry from my last post. We’ve had great success with dropping off our laundry and getting it all back clean, folded and not too heavily scented. Easy breezy.

3 thoughts on “Spring is still springing”