As difficult as it was to leave Buenos Aires, we had a date in Rio de Janeiro with some girl from Ipanema – and let me start by saying that three days is not enough time to take in all the next Olympic host city has to offer. But we gave it a good shot!

Based on a friend’s recommendation, we booked a great hotel two blocks from Ipanema beach. We planned Rio at the last minute, thinking it would be better to hit the sights there before heading to our friend’s place further down the coast.

Luckily for us, we arrived in Rio a few days after Carnival party revelers returned to reality. Flights into the city were inexpensive, as were many good hotels – in our case, 65 per cent off the rack rate. Bonus!

The good price for the flight to Rio came at another cost – namely a departure from Buenos Aires just after midnight and a 5+ hour connection through Saõ Paulo. We arrived in SP at 4:30 a.m. and promptly found a nifty lodging arrangement in the airport. A windowless, micro cabin with two bunks and just enough floor space for our small bags. Being able to have a catnap between flights meant we were in fine form to cram a week’s worth of sights into three days from the moment we landed. 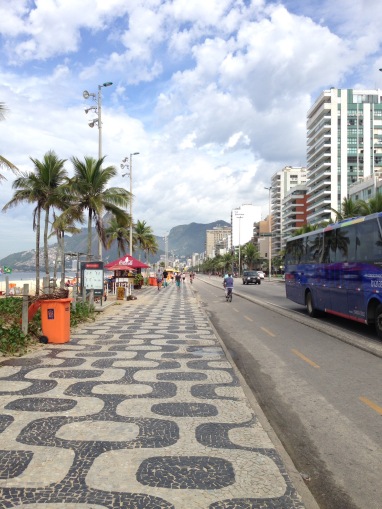 Sidewalk along Ipanema. Copacabana has a different pattern on the sidewalk.

We dropped our bags at the hotel and then started with a walk along Ipanema beach, which conveniently connects to Copacabana beach. It was stinking hot, humid and we were loving it. The beaches weren’t overly crowded and there were lots of people running and cycling along the pathway that stretches between the beach and the coastal road.

We found Rio very cosmopolitan. We also found there is a much bigger focus on customer service in Rio (eager to help) than in Buenos Aires (indifferent). It was refreshing to find a large selection of stores selling name brands at reasonable prices. The import taxes in Argentina make it cost prohibitive to pay a decent price for any items not made in Argentina.

Before we left for Brazil, I foolishly tried to find a swimsuit in Buenos Aires. After much searching, I found precisely three-and-a-half styles, none of which I would be caught dead wearing. Alas, once in Rio, my swimsuit cup runneth over.

As great as it was to shop to our hearts’ content, we did struggle with the language. I have no ear for Portuguese. I just couldn’t make sense of it. A few bits sounded Spanish, but not near as much as I would have expected (nor liked). If they spoke Spanish, Brazil could have been a contender for a longer stay in the future. I guess we’ll just have to suffice with shorter trips to Brazil and to travel with some of the Portuguese-speaking friends we’ve made along the way. Where there’s a will…. 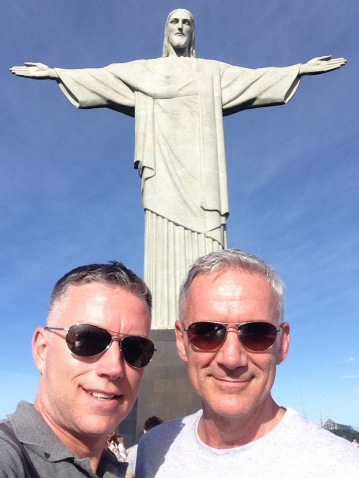 It’s near impossible to get the scale right on the big guy behind us. Statue (with pedestal) is 38 metres.

Top on our list of ‘must sees’ was Christ the Redeemer. It requires an early start to avoid the crowds. A train takes you half way to the top, which is where you buy your ticket and essentially commit yourself to subsequent lines you can’t even see yet. Once you buy your ticket, you get in another line where they slowly shuttle you, in 10-seat vans, to within 220 steps of the the top. Oh yeah, there is a line up once you get out of the van and before you get to the steps. Apparently they only let a certain number of people to the top at a time. Although we didn’t experience it, online reviews say the line ups can be as long as four hours. The second coming might be quicker.

It was worth getting up early and we had spectacular weather. As impressive as the statue/monument is, the 360-degree views of Rio are incredible. We were among the first people there that day so we didn’t have to wait much at all. We finished up with Christ (and the views) by about 10 a.m. Given that Rio will have a mass of tourists in the city for the Olympics, I have no idea how they will handle so many people trying to visit this attraction with their current train/van shuttle service. I expect several frustrated foreigners if transportation to this venue doesn’t improve. 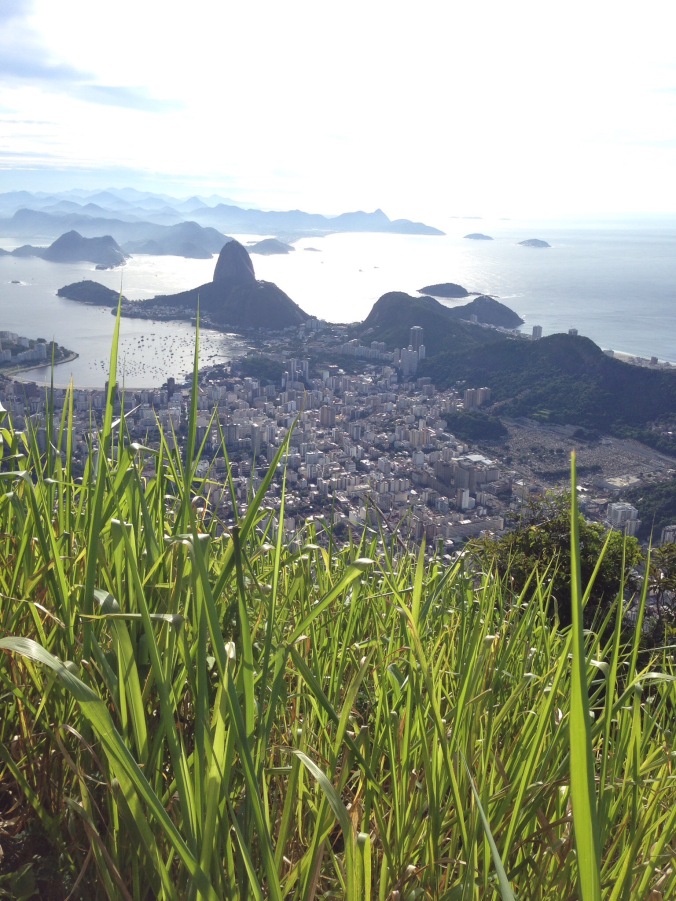 Speaking of the Olympics… there is a buzz of construction going on all over the city, but it seems to me they just started. A new subway system was being worked on by our hotel. Enormous pieces of what looked to be parts of the cast concrete tunnel weren’t in the ground yet. They were stacked up on either side of the road.

Buildings downtown that looked like they might be a venue, barely seemed to be out of the ground. Grasping to say something positive about the preparations, some public spaces downtown looked clean and fresh. But to be fair, we weren’t on an Olympic readiness tour.  As with anything, if you apply more money things happen faster – but it’s no secret that Brazil is broke. I really hope they pull it off, otherwise things could get ugly.

While we were downtown, we chose to hit two museums. Thankfully, they were across the street from each other. Both amazing buildings and worth a visit inside. The Museu do Amanhã has an impressive collection of multimedia exhibits on Planet Earth. The other was the Museu de Arte do Rio (MAR), which has a restaurant on the top level with good food and great vistas – you can even go to the restaurant without paying to get into the MAR. The strange thing is that neither of these museums open until noon. Again, I can’t imagine that will work for hordes of tourist during the Olympics. If you go early, expect to bake in line on the main plaza that has virtually nothing for shade. 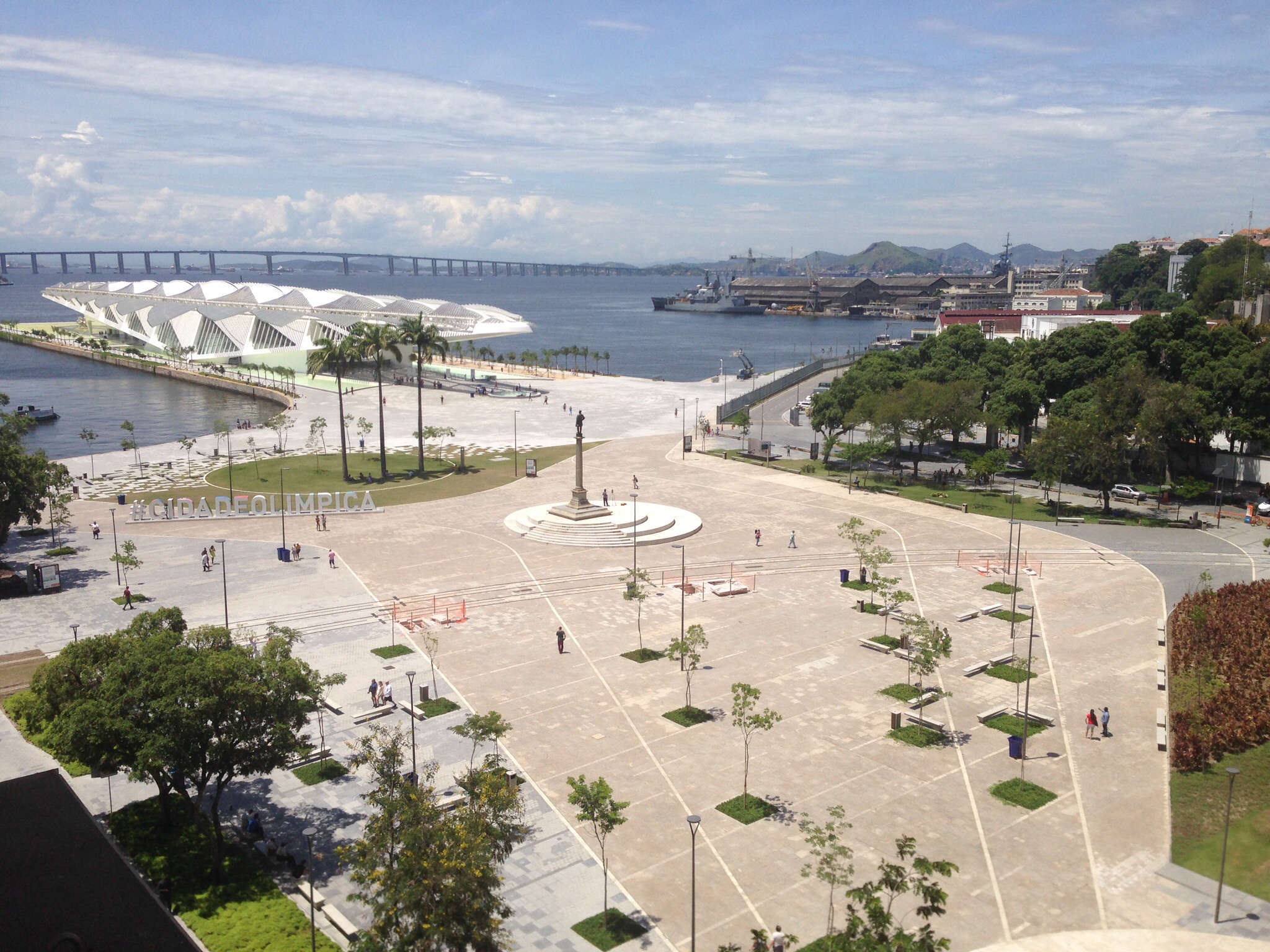 The white structure houses the Museu do Amanhã. Photo taken from the restaurant patio at the Museu de Arte do Rio.

During our three days in Rio, we enjoyed several meals out. And we were surprised at how safe we felt walking around, even at night. It’s no secret that Rio has a nasty reputation for high crime. As with Buenos Aires, you have to be mindful of your surrounding and don’t look to be carrying anything that would make you a target for theft.

The beaches are notorious places for crime: we heard from two French guys we met in the van on the way to see the Redeemer that their backpack “walked off” while they were inches from it on the beach.

With that nugget of intel, we made sure to leave everything valuable in our hotel safe on the afternoon we went to the beach. All we had were  beach chairs, an umbrella, towels and enough money for a few beers. No camera, hence no photographic evidence of our Rio beach wear. You’ll have to use your imagination.